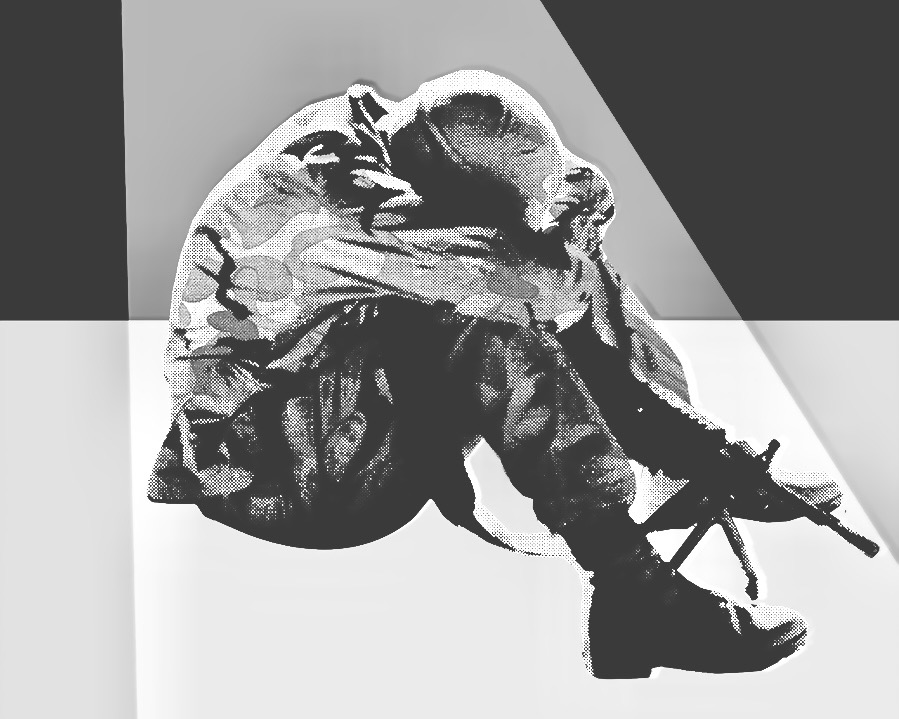 Who is Josh Brooks?

I am 36 years old and was born and raised in the coal mining Bible Belt part of Southeastern Kentucky. I live in Eastern Tennessee with my amazing wife and our four children. I mention the Bible Belt because that has a lot to do with my positive and negative life. I played sports in high school and lived with my biological parents and a younger brother. A few months after graduating high school, I joined the Air Force. That's where my soul search began, figuring out (and realizing I knew nothing about) life. Not only can the Bible Belt indoctrinate you, but it can also shelter you. I had many blaming, self-pity bouts with God. To me, He was this vengeful, wrathful person with a white beard, walking around among the clouds. He was waiting on me to fail to take delight in punishing me. Luckily, later in life, I could seek God out, ask and allow Him to reveal Himself to me. Instead, I discovered a loving and caring God.

As a dad in recovery from addiction, tell me how 2022 has been for you this far?

I've had several life seasons in 2022, and it's not over yet. I began the year in a mental, emotional, and spiritual prison. A delusional prison I had created out of numerous forms of fear, self-will, selfishness, self-pity, pride, and ego. Naturally, a by-product of this was drug and alcohol abuse. Before a beating into submission, I wanted to want to quit, but I still thought I had or could regain some control. The truth is that I hadn't had power in years. I was a slave to drugs and alcohol and had no defense against the lies that the instinctual drive (the limbic system in the mid-brain) that the disease of addiction would create in my mind.

I have a wife and four children, and I am on probation. Still, even that was not enough to keep me clean and sober so that I could pass drug tests and prevent any more consequences from occurring to my family and me due to abusing drugs and alcohol. Thankfully, I reached a bottom that did not involve death or jail. The pain and suffering I was in became more significant than the fear of change. I was hopelessly defeated, and not only did I know I needed help, but I wanted help. I realized that I had not been sober longer than 3-5 consecutive days since my daughter was born, and she was two and seven months old. And things weren't looking any better; I hadn't even been able to put together more than two days in quite some time. So, I went to treatment in Texas and went into it with no expectations other than staying as long as clinically deemed necessary. I didn't just want to be clean of drugs and alcohol; I wanted to change! I wanted sobriety! I was like a sponge and soaked up everything that I could. I think if someone had told me that licking a toilet would keep me sober, I'd have done it! Finally, I was willing to admit that I knew nothing about living without drugs and alcohol and didn't know how to live a spiritual and sober life. 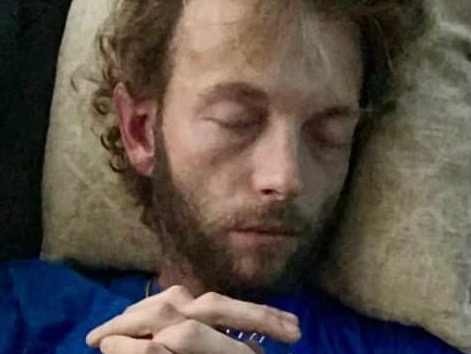 Josh in 2020 during the darkest days of his addiction.

Josh, you are the recipient of a Purple Heart. Can you tell me about that experience?

I was in the United States Air Force and part of the Security Forces career field. The Army sent in a request for forces for a 365-day mission and destination unknown deployment. I volunteered for and was selected to be part of the 732nd ESFS (Expeditionary Security Forces Squadron) Detachment 3, attached to the 89th Military Police Brigade and the 92nd Military Police Battalion. We arrived at the Victory and Liberty complex in Baghdad, Iraq, in November 2006. Our assignment was to train the Iraqi Police within the Al-Rashid District, specifically within the Al-Bayaa' and Al-A'amel neighborhoods of the Rashid district, on standard policing tactics and operations and assist where we could.

On May 14th, 2007, after completing our operations for the day, our squad, which patrolled in 4 M-1114's fully up-armored humvees, was returning to the Victory and Liberty complex to finish our day. We encountered an enemy attack via an EFP (explosively formed penetrator or projectile.) The EFP struck the vehicle I was gunning, creating severe injuries to my left leg.

Do you consider yourself a survivor of Post-Traumatic Stress?

I would consider myself a person who survived a traumatic event leading to traumatic emotional responses. I have learned to navigate better and control those emotional responses. I was taught in a trauma processing group that I was no longer dealing with that event, that the event had ended. Even though my particular situation and event may have been unique, the emotions that the event created were not. They are the same emotions that everyone has to process. So when I could grasp that, I could be no longer terminally unique and use that event as an excuse and justify my poor decisions. So I would say that I am a person that has become open to talking to and relating to others and learning how to live a better life while navigating the symptoms and effects of PTSD.

I got rigorously honest with myself, had an open mind, and was willing. I had and have people to help me through this spiritual growth. I got back in touch with God, and incredibly enough, He was there when I earnestly and honestly sought after Him. Instead of blaming God, everyone, and everything for all my problems in life, I could see that I had my hand in everything I considered a pain in my life. And if I hadn't had a hand in it, I could see where I acted just like the people I was blaming at some point in my life. I was killing myself not only physically but emotionally and spiritually. I have had some fantastic, life-changing realizations. Today I get to wake up! I get to have a relationship with God! I get to ask God for help laying down character flaws like pride, arrogance, dishonesty, egoism, selfishness, self-centeredness, fear, and self-will replaced by love, kindness, tolerance, honesty, humbleness, humility, gratitude, and His will. I get to be a stay-at-home dad instead of being society's idea of success. I get to be a husband that helps my wife with housework. I get to put other people and their needs before my own. I get to watch and admire birds and nature. I get to do service work. I get to do things that help me stay focused on sobriety. I get to be rich, but I don't have much money. I get to be present in every aspect of my family's lives. I get to watch movies with them and sit in the same room. I get to cry tears of joy instead of tears of shame. 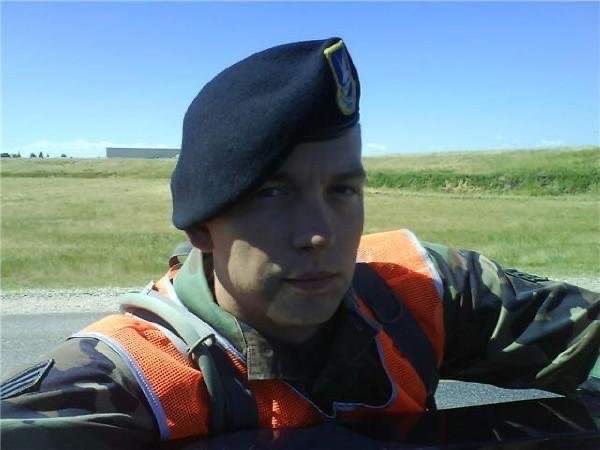 Josh in 2005 before deployment to Iraq.

Tell me a bit about your parenting style now that you're a full-time dad?

My parenting style is so vastly different from what I would have imagined. I would have envisioned myself as being much more rigid and demanding with the yes sirs and no sirs. Instead, I set high expectations, but only regarding my kids being their best. I try to encourage their relationship with God and try my best to lead by example. I try to nurture them as individuals, help them enhance their likes and desires, and encourage them to be bold in being themselves instead of molding them into what I would like for them to enjoy. I try to enable them to have the confidence to stand firm on their morals and values and to be a leader instead of a follower, to respect themselves and others. To show kindness and compassion and not be judgmental. I try to help them recognize feelings and emotions and why they have them instead of just suppressing them. Maybe that can spare them some of the emotional trauma I experienced growing up in a world where boys weren't allowed to have and process emotions. I want to help grow them into God-loving, respectful, responsible, and kind human beings with impeccable work ethics. To me, those things, along with pursuing what they love and are passionate about, are what I will use to measure success for them and myself as a parent. And the key word in all of that is try. I fall short as a parent almost daily, but just as I expect them to give their best, I also hope that out of myself. Some days our best will be less than others, but it's our best for that day.

Besides your beautiful wife and children, what motivates you to wake up every morning?

Gratitude. Today I am so thankful that God saw fit to give me another day on this earth. My whole attitude and outlook on life have changed; a genuine second chance at life has been bestowed upon me. I have no idea how many opportunities God has given me, but I'm sure glad I grabbed ahold of one of them before I ran out of time to do so. 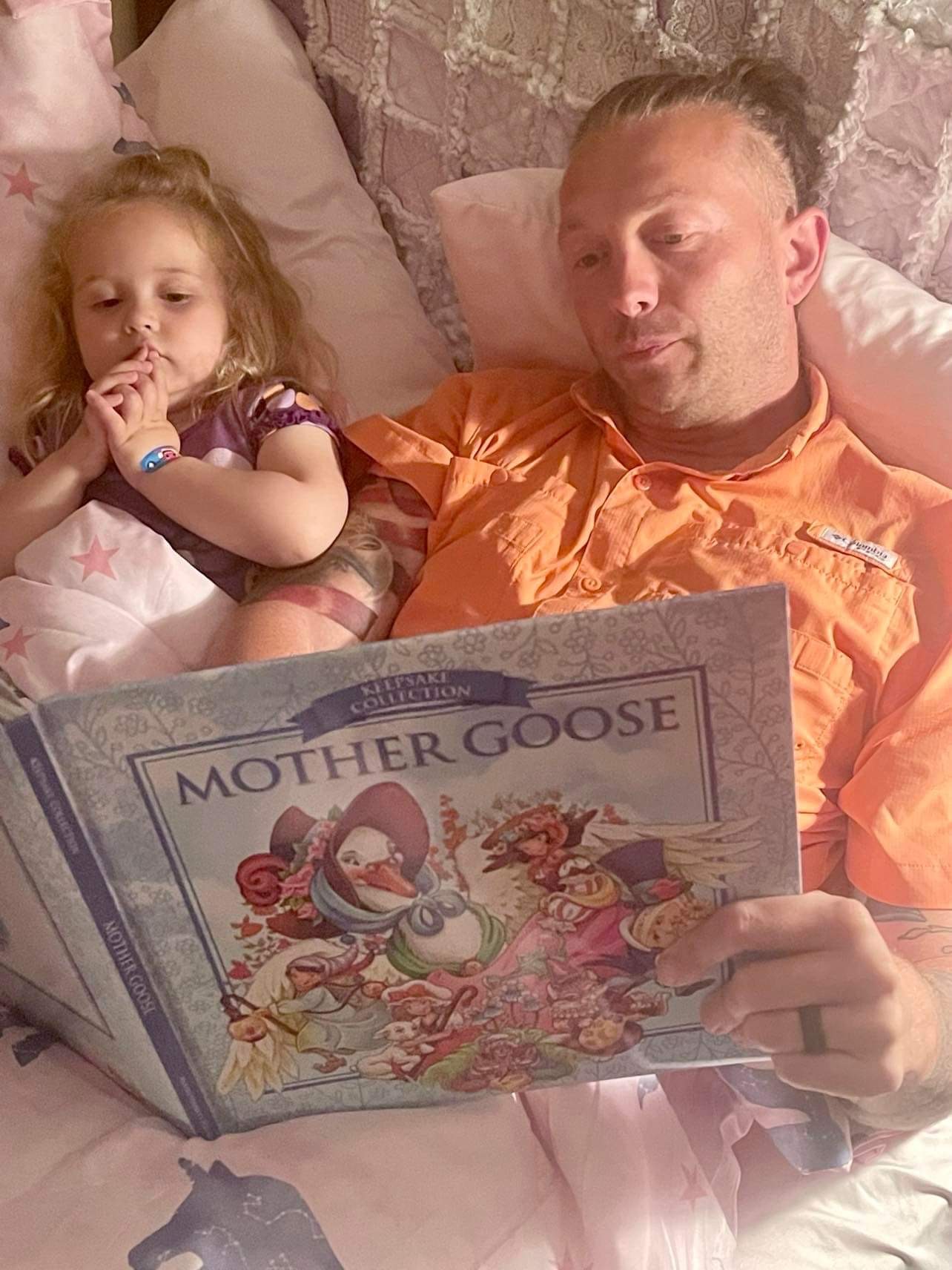 Josh reading bedtime stories with his youngest daughter in 2022.

Any parting words for the readers?

Do whatever it takes to practice being present, totally and entirely at the moment. We only get one shot at life, which isn't slowing down. Every moment is a true gift, and our next breath is not guaranteed. Holding on to and dwelling over the past will rob you of any joy you can have. It's impossible to go back and change anything, but what you can do is learn from it. You can use your past as your biggest asset and remind you that you do not want to be that person again or make the same mistakes. Your past gives you a story and character; you are not a "cookie-cutter" human being because of your past. It can be what enables you to share your story with someone and maybe give them a glimmer of hope which can save their life. My life is not perfect, nor will it ever be, and I'm thankful for that. Some things keep me humble, which help remind me that I need God even on my best days. I like to say that humiliation knocked me off my high horse, and living with humility prevents me from getting back on it.